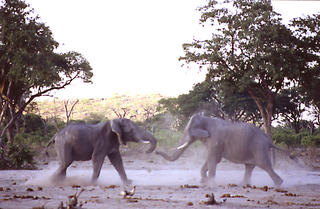 The Botswana Wildlife explains that most animals have territories or home ranges and the sizes are affected by availability of food and terrain.

The term 'territory' is used for most species but this is a little deceiving as it indicates an area where no other individuals of the same species and sex may enter. Most animals have marked areas that they defend but because of seasonal changes and availability of food and water these areas overlap with competitors - and the area then becomes a home range as opposed to a territory.

The seasonal changes in Africa ensure that food and water availability are constantly changing and the vast sizes of Tsome of the home ranges do not allow an individual to protect it from others.

The males of some species of antelope will however have fiercely defended territories for the duration of the rutting season, preventing other males from entering but after the season the territory is opened up.

With home ranges the marked area of an individual will overlap with that of another individual. There will generally be a central area of any home range that will not be intruded upon but the outer lying areas may overlap considerably.

The size of home ranges will also vary over the seasons, in particular in the more arid areas. During the dry season in arid areas such as the Central Kalahari in Botswana, species will spread out as the water sources and food sources dwindle. Home ranges will thus also get bigger.

Predators in particular will be affected by this change in season as their prey will be spread over a wider area. With the rains herbivores will concentrate in the valleys where the new grass is growing and the home ranges of the predators will shrink to adapt to this new season.

Migratory species such as the wildebeest in east Africa are constantly on the move, preventing the occurrence of long term territories and home ranges. Here the males will establish territories for the duration of the rutting season and protect the area from other males but as soon as the rut is over they will disperse with the rest of the herd.Territories and home ranges are not the sole preserve of males as the females of many species also have home ranges, overlapping with the ranges of other species.
Botswana Safari and Tour Packages
©2022 Siyabona Africa (Pty)Ltd - Private Tours and Safari