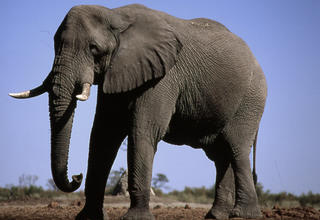 Botswana has the greatest elephant population in Africa with numbers exceeding 50 000. The highest concentration of elephants can be found in the Chobe National Park and Linyanti region. It is not uncommon during the dry winter months to see the floodplains of the Chobe River and Linyanti literally covered with Elephants.

The main diet of the African elephant is herbivorous and various according to its habitat. Adult males usually live alone and the herds are typically made up of related females and their young. The matriarch of the herd decides the route and teaches the rest of the herd how to find water sources. An elephant herd is very loving to each other and when an old elephant dies, the rest of the herd will stay behind and grieve.

Botswana's Elephants are renowned for being very 'safari friendly' especially in the Chobe area. In Savute a large number of bulls live out their lives. Even during the dry season when water is at a premium the bulls will be there. Nobody knows for certain why Savuti is favoured by the Elephant bulls.

In the past it was said by many ecologists that Botswana had an 'Elephant problem' in that there were too many Elephants for the vegetation to support. It is true that the Elephants have changed the landscape of places like the Chobe River from thick woodland to open plains. As the Elephants move to the permanent water areas during the dry season the vegetation takes a hammering.

Many reasons are given for the growing population of Botswana's African Elephants. The logical explanation seems to be that historically the Elephants' migration routes took in Chobe, the Caprivi Strip in Namibia and the Zambezi floodplains of Zambia and Zimbabwe.

However, with the bush war in Namibia the South African defence force was involved in shooting Elephants for ivory and for target practice. With this the Elephants stopped crossing the Chobe River and instead spent the winter months on the Botswana side of the river. Today however Namibia is at peace, the Caprivi enjoys protection from the Namibian authorities and the Elephants have started crossing the river again. It is hoped that this will ease the stress on the Chobe's vegetation.

In most parts of Africa Elephants only have to fear man. Lions and Hyenas may take youngsters if they can get them away from the herd but in Botswana there is a pride of Lions that has adapted to killing sub-adults and even adults at times. Where this behaviour began is uncertain.